Matt is an LA-based actor, writer, and environmentalist. He is currently finishing a degree from Arizona State's School of Sustainability.

Wrestling with my thoughts and emotions is my national past time. My preferred coping method has always been intellectualizing, or removing myself entirely from, an emotionally stressful situation rather than dealing with it. It has been easy for me to believe that my emotions could be reasoned away, kept under my control. Sooner or later, though, we all have to deal with what weighs us down. My first experience with therapy revealed how much ego sat comfortably beside and kept me from confronting my pain.

As a kid, I attended Confession with my mother: waiting in line, scrambling to come up with some sin that was neither too grave but somehow believable for a 12-year-old to pass off as needing forgiveness for. One-on-one with a priest, I remember feeling disconnected, misunderstood, and shamed. How can someone who doesn’t know me assess whether or not I’ve been good or bad? Why should I offer up my sins to someone who didn’t look like me, or come from the same background as me?

I felt ashamed for making things up at first, but eventually those feelings faded. I started applauding myself for the creative lies I could come up with just before it was my turn to close the door behind me again. My childhood confessional experiences were my first lessons in forging how I really felt. False feelings that would make their way into my future relationships, expressed in my attempts to avoid conflict and intimacy.

My first sessions with my therapist brought back similar feelings. The nervous leg shaking. My brief responses. Checking the clock when I knew I had nowhere else to be. It was hard to be present when I had gone so long faking my emotional self to suit my needs, so when my therapist hit me with those first few diagnoses, each one came with a personalized retort.

Panic disorder? I got 2 grams to cure that. Agoraphobia? I don’t believe it.

But my body would remind me daily of what I needed to confront, as it tightened my chest, cut short my breath, and, ultimately, left me in a pool of frustration and tears.

By the second month, I opened up more. Growing up Mexican-American and raised in the Catholic tradition, we looked to the church for spiritual and moral guidance. Problems were usually addressed with a priest, absolving ourselves of the guilt without actually putting in the emotional work necessary for healing. It was always easy for me to pass things off to God, but as I got older and I grew out of my faith, I looked for new ways to cope with emotional stress. Removing myself from situations and rationalizing outside of me became the next best thing.

By the third month, I was ready to unlearn the habits that kept me from reaching my authentic emotional self. For the longest time I looked at anxiety as something to bury. I thought, if I could just keep it under my control, then I wouldn’t have to worry about it. But, as I learned, suppression doesn’t lead to healing.

In therapy, I learned to voice when things made me uncomfortable, I picked up a pen and argued with those challenging thoughts on paper and confronted my preconceived fears that kept me from moving forward. I learned meditation, and for the first time since I was a teen, I started exploring a new chapter in my spirituality.

I became interested in Judaism after reading the story of Jacob wrestling with an angel. Here was a man who was at the lowest point in his life, and in the middle of the night, a stranger ambushes him and wrestles with him until dawn. When he sees that Jacob won’t back down, he blesses him and changes his name to Ysrael, “One who wrestles with God.”

I had never known a story that captured how I felt about the divine. All my life I felt like I wrestled with what I was expected to believe about God, and what I wanted to believe God could be. From there I became fascinated by Judaism’s principles, prayers, laws, a lot of which were similar yet also different from my Catholic worldview.

According to Jewish Law, Hefker is a legal status that an item is ownerless and free to be claimed. I became attracted to this principle not for its legal definition, but its spiritual application. I must have a degree of self-abnegation in order to open myself to something greater. If I wanted to get to the root of my anxiety, if I wanted to connect to my emotional self again, then I needed to let go of my ego and become ownerless.

After consulting with my therapist about my budding interest in spirituality, he recommended I take a fresh approach. “Consider doing something just for you and your faith. Just as in any new relationship, just as one offers up their time and talents, you should do the same.” I set a date and planned a road trip.

Contrary to what one may think, the Mojave Desert is actually full of life. Trees, shrubs, lizards, gorgeous views of the San Jacinto Mountains. I arrived on a February morning in Joshua Tree to a clear sky and quiet surroundings. I napped and set out for a hike.

On the trail, I took in the clear empty sky which rested above the snow-capped mountains, which then sat on top of the dry desert. Ownerless. That was the word that came into my mind as I took in the landscape. I thought of Moshe at the Burning Bush, wondering if he could accept his call to leadership. I thought of Jacob as he was alone in the wilderness, wondering if he could ever return to the life he once knew. Half a day’s worth of hiking later, I took my final glimpses at the gorgeous land, recited a prayer and kissed the soil.

That weekend I felt a shift in my mental landscape. A sense of peace and clarity. An eagerness to get back on track to what calls me most in my life. This past year has taken so much from us, but it helped me understand that in order to grow, sometimes we have to shed our old habits and ways of thinking in order to gain a clearer vision of what’s to come.

Therapy became a guide that came with the tools used to rebuild myself. And in that process, I found faith again, hidden in the outskirts of the Mojave. 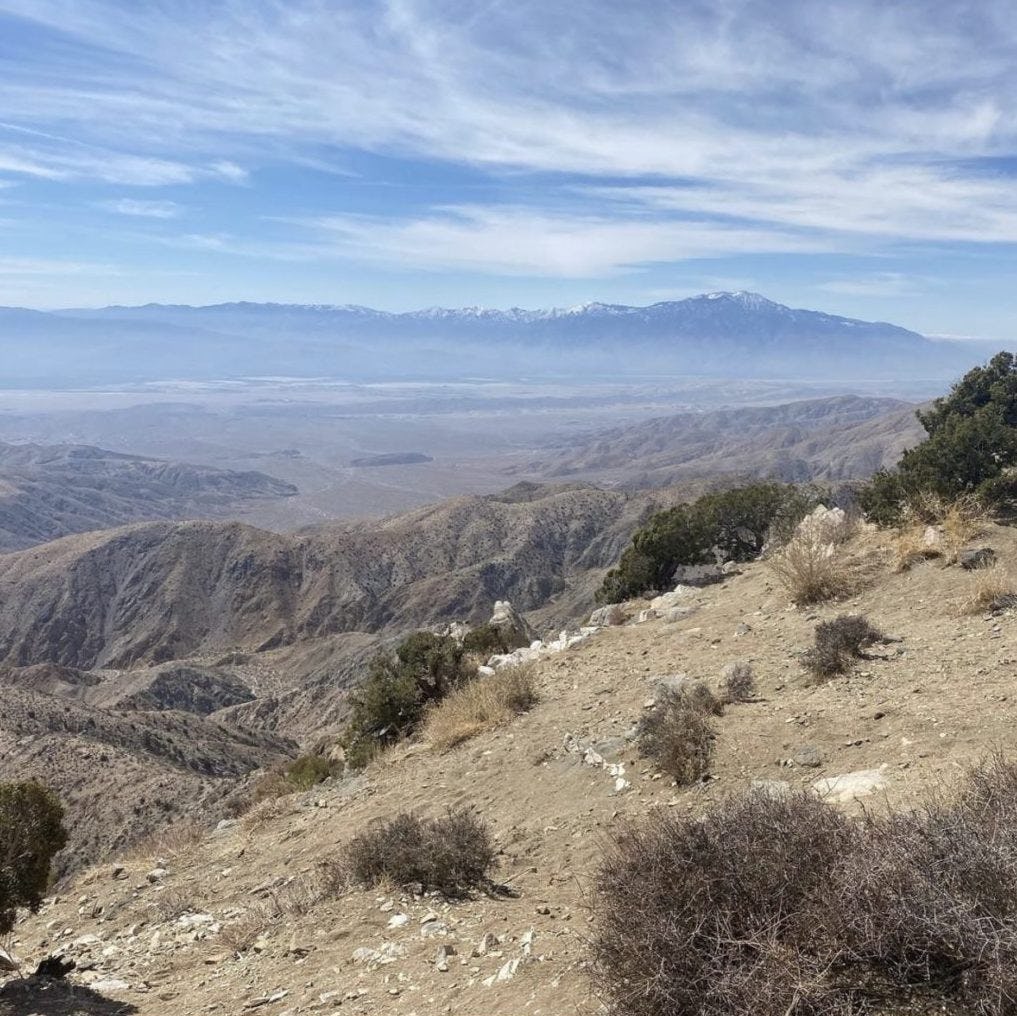 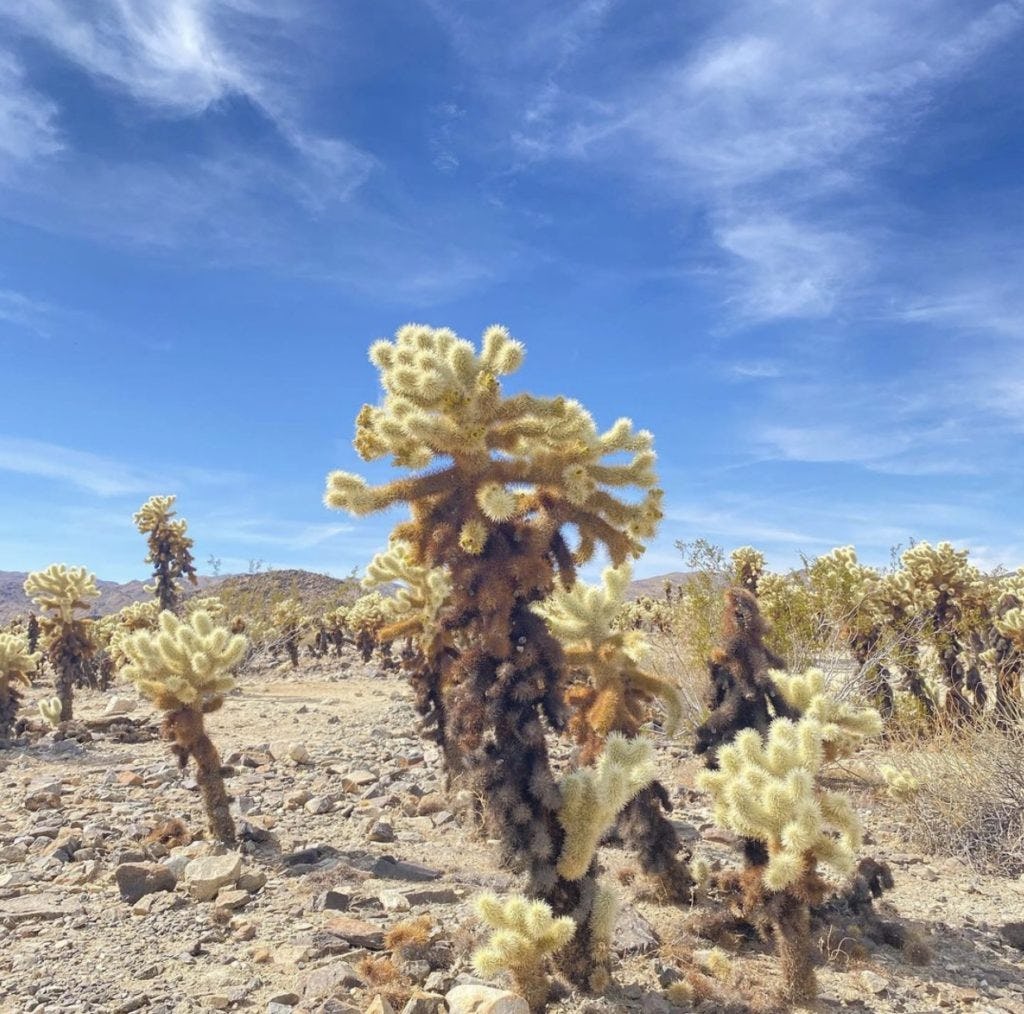 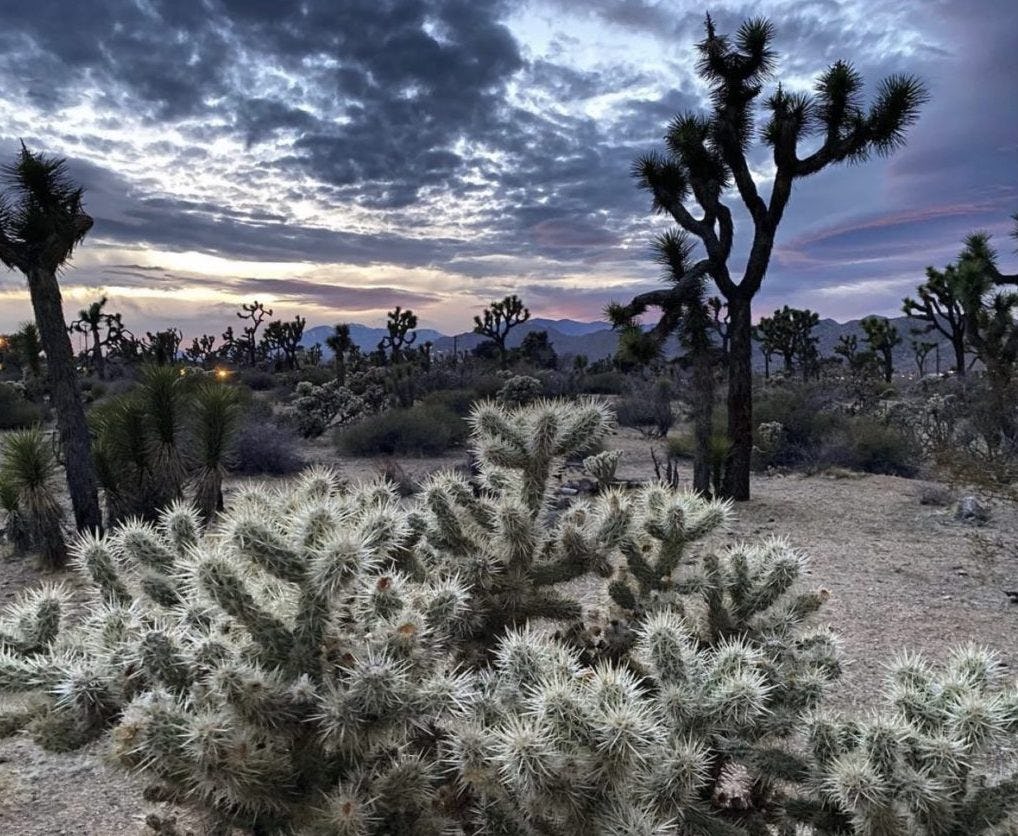 Matt is an LA-based actor, writer, and environmentalist. He is currently finishing a degree from Arizona State's School of Sustainability. 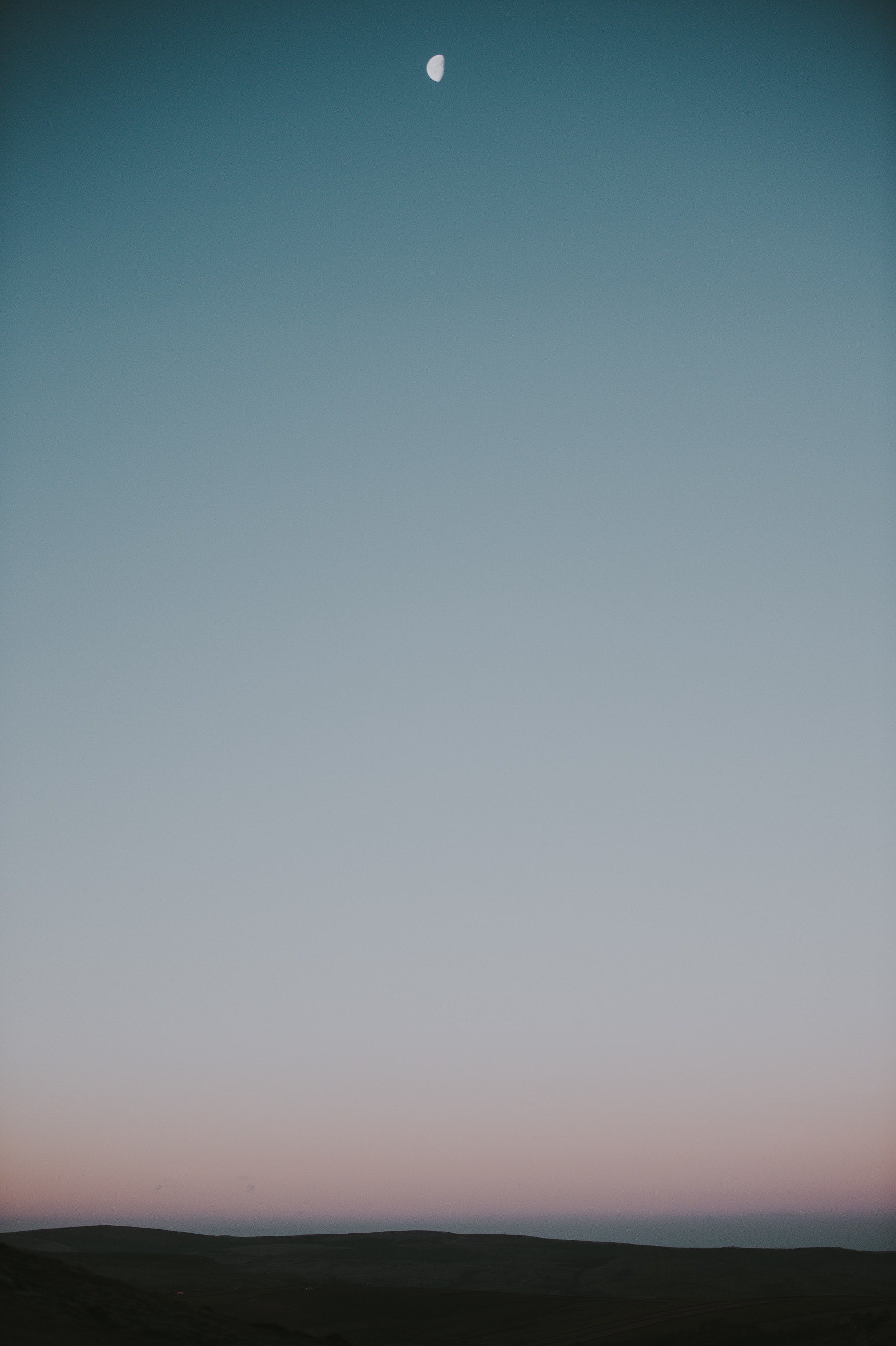 Through dreams, it is possible to fly very high; to tell secrets without fear; to meet someone who we don’t see anymore; to perceive that impossible things come true when we fall asleep. 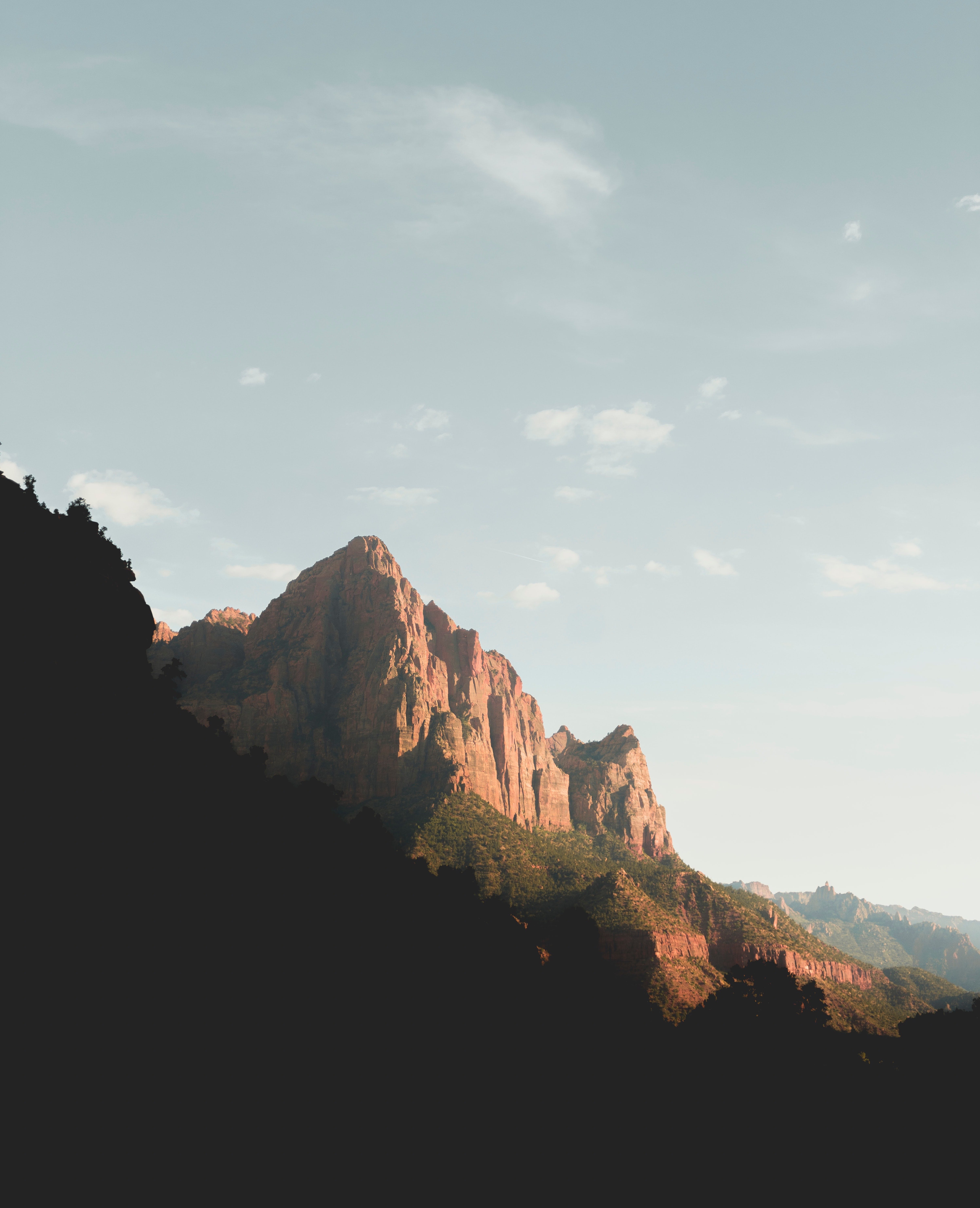 essay A Path to Healing

The morning light beckons. To the east, the sun rolls over the ridge, a yellow beacon piercing the gaps in the tall evergreens, blinding and bright.